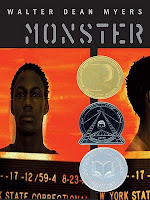 In the interests of full disclosure, this book has been on my mental to-read pile for at least two years. A writer friend of mine, Linda Joy Singleton, heartily recommended it, but I have to admit, I cringed at the title. I knew it would not be a green meadows, blue skies and sweet little bunnies read (I prefer these, I'll admit). This was serious stuff. So....I put it off.

Then it was assigned for the upcoming residency at Vermont College starting next Monday. So, I bit the bullet and got the book from the library.

Basic plot: African American boy from NYC is charged as an accomplice in a felony murder and this is his trial.

The story is gritty and well told; however its storytelling form is the real nugget in this piece. The story is written in script format interspersed with bits of prose and handwritten journal entries, as well as images. As such, it was an interesting mix of Hollywood meets young adult fiction. The images add to that feeling by offering snapshots one could imagine posted up next to beats/scenes scattered along a chaotic storyboard on some lonely script writer's wall.

It is perhaps the latest version of storytelling for our generation. A book of letters does not work super well in today's society. A book of emails or instant texting, absolutely. Just check out the TTYL series by Lauren Myracle. Script format, however, seems like an underused method for the world of kids' novels. I do not know of any other ya or mg books told in this style (and now hope for a few suggestions from all of you much more plugged in readers out there!) It offers the writer novel methods of honing focus on one character and pulling back out, much like a camera. It is worth playing around with as a writing format. Also, because of the vast amount of white space script format inherently brings with it, such books might lend themselves more readily to reluctant readers.

The one question is, what stories lend themselves to script format? Murder trial, absolutely. Drama queen? One-day-in-the-life types of stories? Are there more?

At the very latest, next week in Vermont, I hope to find out!

For more great reviews, hop over to The Book Review's fearless leader's blog and check out what the summer has to offer (maybe even a few green meadows!).
Posted by Unknown at 7:23 AM 4 comments: