Brubaker Bradley brings to life the story of the four children - Beverly, Harriet, Madison and Eston - that researchers have, after much prodding, historical research and DNA analysis, acknowledged Thomas Jefferson had with one of his slaves, Sally Hemings.

Brubaker Bradley's story begins through the eyes of Beverly Jefferson, the eldest of the four children who survived into adulthood, and follows the story through Madison Jefferson, the middle son, and finally, Peter Fossett, the son of the blacksmith, Joe Fossett, who was sold after Jefferson's death.

It is told from close third from just one character's POV at a time. When Beverly becomes a teenager, Brubaker makes an ingenious transition from his POV to Madison's. So much so, my ten year old exclaimed, "Mama, it's Maddy's story now!" It was like a magic trick that the audience sees but still marvels at. Brubaker Bradley is a pro. I learned a few new tricks.

The story revolves around family. In this particular case, a mother, Sally, who was a slave, yet became, for all intents and purposes, the second wife of Thomas Jefferson after his first wife died. And a father, Thomas Jefferson, who wrote all men were created equal yet kept his own children as slaves. And four children who were the slaves and children of one of the United States' most revered but, as we learn through walking in these children's shoes, hypocritical founding fathers.

Brubaker Bradley spent three years working on this book. It shows. She has taken so much material and blended it so seamlessly. The story is suffused with childhood, slavery, history, philosophy, politics, historical figures. They all come to life.

My youngest daughter and I listened to the audio of this book while in DC and Charlottesville for Spring Break. About halfway through the book, we went to Monticello, Jefferson's home. My daughter's been there before, but it hadn't stuck. This time, though, the home wasn't just one more historical building we walked through. My daughter looked for traces of Hemmings' family members, and Fossetts and Hearns. History wasn't boring. It was alive and had faces. It was so cool. We even listened to a part of the story while sitting on a bench on Mulberry Row, where the slave quarters were at Monticello. Afterwards, when we were listening to Jefferson's Sons again in the car, my daughter said over and over, "oh, yeah", as she remembered the places that were a part of the story.

This is a book you don't want to miss. The writing is superb. The subject matter begs to be discussed. And the last scene is unforgettable. 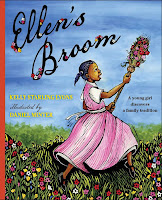 There are so many excellent books that have come out for children that take historical facts and weave them into fiction that breathes with life. Another, for slightly younger readers, that embraces an African American wedding tradition, jumping the broom, that is inherently tied to slavery but may actually predate it is Ellen's Broom by Kelly Starling Lyons.

I've never been much of a history fan, until now. Through these two books, I feel as if I've discovered a treasure trove of history that isn't history. It's life. Life that readers can understand, embrace, ponder and cherish.

For more great reads, hop on over to Barrie Summy's site. It's blooming with books!