The Book Review Club - Mark of the Dragonfly 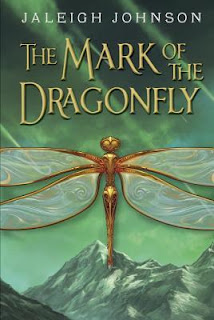 The Mark of the Dragonfly
Jaleigh Johnson
middle grade / fantasy

This was my best summer read. It's a great beach book, and since I can't quite let go of sand and sun, I'm reviewing it.

A little more detail, you say?

Piper is a scrapper from the Meteor Fields of the Merrow Kingdom in the northern reaches of Solace, a world in which things fall through a hole in the sky from one world to another. There are hints that the world losing objects is ours and Solace is a parallel universe, but that isn't spelled out in book 1.

One of those objects turns out to be a girl, Anna, who is part human and part mechanical. She is sold to a ruthless politician/engineer (a new combination), Doloman, from the Dragonfly Kingdom. Merrow and Dragonfly are at war. Anna could be the key in turning that war, giving one side a weapons edge. Only problem - she seems irreparably broken. She won't wake up. Doloman journeys back to the north to find the scrapper who sold him Anna, hoping to learn more, but his caravan gets caught in a meteor storm. Enter Piper, who has a special (magical) gift with anything mechanical. She is a synergist. She discovers Anna in the caravan wreckage and takes her home to nurse her. In her presence, Anna reawakens, and they begin a journey of discovery that turns into one of flight as Anna's true identity as a machine becomes apparent, and her value.

It would be hard to sum up the story in fewer words. There is so much to discover. And I haven't even gotten to the chamelin on the train, Gee, who is a boy and also a winged creature. Or the train! For those who are Lord of the Rings fans, this will give you the same cozy, curl up and disappear in a fantastical adventure feel. Granted, there is a lot of world-building, and yes, information dumps. Watch out for those. The beginning is pock-marked with them. And, homage to Hunger Games. Piper is from Scrap Town Number 16 in the Territories and they're dirt poor.

Yet, the characters are interesting enough, the pacing fast enough, the mashing of steampunk and fantasy novel enough (and the sun and sand perfect enough) to forgive Johnson the dumps. In the end, I just had fun on this adventure, and I haven't said that in a good long time.

So, if you've feeling up for a jaunt into a fantastical world in which anything is possible, pick up The Mark of the Dragonfly. And for more great Fall Fun, take a gander through more Book Review Club reviews on Barrie Summy's site.
Posted by Unknown at 7:28 AM

A fine review of what sounds like a fun book! Sigh, summer is past tense now. I wish I had more time to read.

Just the other day I was saying I need to read more fantasy... And then along came your review. Wow. This book sounds so good. I love the hole in the sky concept! And Piper sounds so perfectly spunky. I'm curious to know at what point in the book Anna wakes up? The middle? Thanks for reviewing.