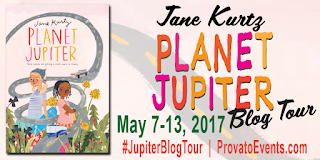 I have the unexpected, great pleasure to participate in the Planet Jupiter blog tour. I've been a fan of Jane's writing for years (since she lived Kansas, a lot closer to my home in Oklahoma, and we presented together). So, while I know the author, I asked for an ARC and to participate in the tour--like a crazed reader fan. Fortunately, "crazed" doesn't put Jane off, and here I am.

Basic plot: Jupiter, a child busker whose nomadic family moves up and down the Pacific coast earning a living, is thrown out of orbit when her father leaves, her brother takes on a stationary job at a cafe to earn money to help Jupiter, her mom, and her adopted-cousin from Ethiopia, Edom, move into a house in Portland, while Edom's mom (Jupiter's aunt) undergoes treatment for cancer. Jupiter is thrust into the role of big sister, one she feels none too comfortable with, and wants to run away to the only life she knows and loves--busking. Edom wants to run away to find her mother. The two devise a plan to reach their goals.

Jupiter faces very relatable problems--welcoming a "new sibling", moving, the new and unexpected--that will awaken instant kinship in readers young and old. The novelty of her setting and family lifestyle/occupation, keep the reader engaged. This is a new take on moving house by actually moving into one. And while Jupiter doesn't have much trouble making friends thanks to her nomadic/performance drive life, Edom does. The disparity in their personalities and experiences speaks to more than one type of reader.

One aspect of the story that was harder for me to relate to was that Jupiter so readily forgave her father his many shortcomings, not least of which--leaving her. She displaces her anger on her mom's new love interest, which feels very true to life, but I would have expected more anger, more lashing out, more frustration at being abandoned. Jupiter does plan to run away, but back to the life she knows, and she never completely comes off the rails. She is fairly steady. Edom isn't. She is younger, and has already lost one parent. Maybe that is truer to life, and maybe that's why the emotional arc feels softer to me. Fictional plot trajectories have a tendency to cut years off what might happen in real life and/or combine a lot more subplots into one, or spike the climax more than what would happen in an actual setting. Still, dividing the climax across two characters, and having the supporting character feel the abject hopelessness of her situation more poignantly did soften the resolution for me.

Nevertheless, there is a lot to love in this story. From a craft perspective, Kurtz makes use of the busking profession in a creative way. She starts each chapter with verse from a folk song that resonates throughout the chapter, subtly prepping the reader for the events about to unfold, and highlighting the emotional trajectory via song.

The subplot about urban foraging for food has me wracking my brains as to whether my city is as edible as Portland, Oregon, which would be a fantastic jumping off point for classroom exploration of the world immediately surrounding any school.  Or go out and see what part of your city you can eat. And somebody warn the crickets and ants. They are some of the tastiest delights in any neighborhood.

For more great reads, whistle on over to Barrie Summy's site. She's belting them out, and in verse!

I love this premise! Busking and food foraging sound like fun thing to learn about. And I love the idea of each chapter beginning with a song from a folk verse. Thanks for reviewing! And I hope your luggage has shown up.

Probably a theme that too many young adults can relate to these days. - Margy

I don't recall seeing a busker in kids' book before. It sounds like a fun premise to balance the tragedy. I always appreciate your analysis of what works well or falls short in a story. Sorry to be so slow to comment - I was in transit moving home from the UK.